Posted by charliespeller on September 29, 2011 in Yoga healing | 4 Comments 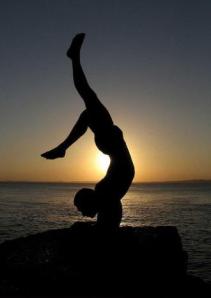 I’m in Texas and yoga teacher training starts tomorrow….. so for my first post I thought I’d start by going back to what drew me to yoga and how it all started…I guess this post is useful if you’re new to yoga, are thinking about trying it, or maybe you’ve just stumbled across this and you’ve never considered yoga before….and if you’re a seasoned yogi, it’s good to look back at LBY –  life before yoga, that is 😉

Gym jiminy, that’s how it goes

I was a complete gym bunny. I’d go every morning before work, run at weekends, do boot camp, boxing training, body combat… you name it I’d try it. I ran a lot too — 10k, half marathons… Yeah, it felt good, but my body started to feel the pinch and even though I took care to stretch I still got hip problems, knee issues, tight chest muscles which lead to shoulder issues, dodgy hamstrings…etc, etc! Not good! When I think about it now, it does seem a bit crazy, but it’s what I thought I needed. Until I found yoga that is.

I’m not saying that the gym is bad — I really did love it, but I found myself in a situation where work was hectic — really high-pressured  — and then as a distraction, I’d go and pound it on the boxing pads or on the treadmill. That was just as manic as work and a busy gym can also be quite a stressful place. “Grrr! D*mn that woman, she’s just taken that 5Kg dumbell”…

About a year ago, in search of some downtime, I took a punt on a Yoga Surf retreat in Portugal that looked idyllic.The other half and I love to surf, but we didn’t have a clue what to expect with the yoga bit… I thought it would be easy and a bit of a cop-out compared to my usual gym routine. I mean, it’s all hippies and weirdos that do yoga, right?…

We practiced morning and night for a week and that’s all it took to get me hooked. Yoga wasn’t at all what I expected – it’s HARD!

So if you’re like I was and couldn’t possibly sacrifice a pounding session at the gym for yoga – all I would say is try it. I’ll talk a bit about the styles of yoga in a second, but believe me in some 90 minute classes, you could be burning a thousand calories. Sound easy?….  Equally, if you’re not looking for the hardcore workout, there’ll be yoga for you too – more on that now…

Variety is the spice of life

I was really lucky to find a yoga studio that doesn’t just focus on one style of yoga and for anyone just starting yoga, I would totally recommend trying as many different yoga styles as you can. For me I get different things from the different styles and I would say that’s what’s enabled me to grow my practice and tune in to the type of yoga that I need at any given time.

To give you an example; I love the challenge of new poses and you definitely get that from a Vinyasa Flow class. There’s lots of focus on breathing and ‘flowing’ into each pose with the breath. The class usually reaches a crescendo with a challenge pose and then you get cooled down into relaxation…bliss! BUT if I want to amp this up a bit, I might head to the hot room – yep, might sound crazy, but you do the same sort of thing, just in over 100 degrees of heat. Now that’s a challenge… and in the words of my husband, “it felt like my b*lls were boiling”.

Then there’s the Bikram style hot class. I won’t go into too much on this, because Bikram himself does a better job of explaining it , but basically it’s a sequence of 26 postures and two breathing exercises in 90 minutes. It’s always the same and pretty much works every bit of your body. I normally come out of the room feeling like I’ve been beaten up and dragged through a bush, but 20mins and a coconut water later, I feel amazing!

So the type of yoga that will suit you, will depend on what you need. I’ve found that Jivamukti yoga is just the medicine for keeping me grounded and taking me out of my own drama.

I guess, what I’m saying is if your first experience of yoga isn’t great, try a different style – there’ll be one that you’re drawn to.

How you feel in a yoga class isn’t just about the style. Just like in a group exercise session at the gym or with a personal trainer, you’ll want some kind of a rapport with the teacher. I’d say that the connection between you and your teacher is one of the most important things in yoga. Not in an overt way, like you have to be best pals and hang out after class, but you want to feel like they understand where you’re at. And when you find a teacher you click with — maybe even get inspired by— it really makes a difference. You’ll notice it too when you take a class with a teacher that you don’t ‘gel’ with as much.

The moral of the story

So, if you’ve managed to get to the end of my first proper post and I haven’t bored you to tears – thank you!… all I’ll say is this — I reckon there’s a yoga out there for everyone! And whatever your reason for trying it — mine was definitely about the fitness at first — just give it a go. Never know, you might like it….